How do you say this in English (US)? 自我感动
See a translation

I don't know how to express this idea in English. Essentially, you feel "emotionally touched by yourself" because of something you did for another person.

For example, an overprotective helicopter parent might berate a child for disobeying them, and then go on about everything they did for the kid, all the emotions and time and resources they put in. While going through how great of a parent they are despite the fact their kid is a little shit who never listens and doesn't understand their hardships, they're emotionally overwhelmed by how amazing of a person they are, but no one ever understands them nor sees everything they've done for this family, and start crying in this process of "自我感动".

Edit: I think the examples in this post are a lot better than mine.
https://english.stackexchange.com/questions/431...
(but none of the answers match what I'm looking for)
Answers

When you "disagree" with an answer
The owner of it will not be notified. Only the user who asked this question will see who disagreed with this answer.
OK
Read more comments

I'm actually looking for a term that is a little like self-centered, with some self-serving bias, but weaker. The closest term I can think of right now is "victim mentality", but that doesn't entirely fit. There's not as much focus on everything bad being everyone else's (including the world's) fault, and more focus on all of things they've done for someone/something/some goal. They're basically emotionally moved by all the effort they put in for someone/something else (especially when they don't think their effort was equally "reciprocated" by results).

Ack, my example was kinda bad and I don't know if I'm explaining this clearly...

Elac
30 Nov 2020
So, they think that they are great for what they have done. That would be being vain : arrogant, conceited, self absorbed, vainglorious

So, they think that they are great for what they have done.
That would be being vain : arrogant, conceited, self absorbed, vainglorious

I looked around and I think Martyr Complex is a little similar? But unlike Martyr Complex where you try to do too much because you feel guilty, this is more like a post-event mental process that happens, especially when the results you get don't meet your expectations for all the effort you put in.

I think that in 自我感动, when you don't get the results you want, memories of all you've done for someone/something become very salient in your mind, and you're subconsciously convinced that you're a great person because you did things without getting anything in return (despite the fact, initially, you had high expectations).

There's often this feedback loop, where after you're "moved by yourself", you put in even more "effort", because although you won't get a reciprocated response, doing something that confirms your view that you're a good person (or a good parent, a loyal friend, a focused dreamer, etc.) without expecting rewards in return is rewarding to your ego in itself.

And so this process of "being moved by yourself" can make a helicopter parent more controlling, can fuel a stalker-ish person's pursuit of someone who clearly isn't interested, but it can also be one of the chains that ties someone to an abusive relationship.

It's a bit on the lines of self-justification and self-serving bias, and like victim mentality and Martyr Complex, I'd expect that it's more common in victims of abuse.
0 likes 0 disagrees

Elac
1 Dec 2020
@rere_86 Maybe like a feeling of mental self gratification, as your desire of having expectations met in a situation was not so.

@rere_86 Maybe like a feeling of mental self gratification, as your desire of having expectations met in a situation was not so.

Elac
1 Dec 2020
@rere_86 you're welcome Finding a one-and-done psychological term to describe a condition seems to be difficult, but that is part of what makes psychology so interesting

@rere_86 you're welcome
Finding a one-and-done psychological term to describe a condition seems to be difficult, but that is part of what makes psychology so interesting

[News] Hey you! The one learning a language!
Do you know how to improve the way you study a language❓ All you need to do is write a diary in the language you are learning!
With HiNative, you can have a native speaker correct your diary every day✍️✨
Sign up
Share this question
Newest Questions
Topic Questions
Recommended Questions

The Language Level symbol shows a user's proficiency in the languages they're interested in. Setting your Language Level helps other users provide you with answers that aren't too complex or too simple.

Sign up for premium, and you can play other user's audio/video answers.
Learn about premium features 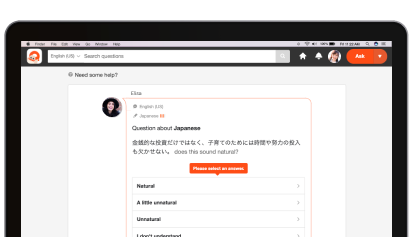 Tired of searching? HiNative can help you find that answer you're looking for.
Register for free

Solve your problems more easily with the app!

How do you say this? What does this mean? What's the difference? Please show me examples with ~~. Ask something else

Solve your problems more easily with the app!